by ghanaweekend
in Events
Reading Time: 3 mins read
A A
0
ShareTweetShare

It was really a December to remember as Citi FM paraded Ghana’s top acts on one platform at the Accra International Centre for its annual Christmas concert.

The programme, dubbed Decemba 2 Rememba, which was held on December 24, 2018, started with a performance by Naa Belvy, one of the fast-rising musicians in Ghana at the moment.

She opened the show with a Christmas song, some of her songs and renditions of other popular songs.

Right after her was Bogo Blay, another promising rapper who dazzled the audience with his ‘northern-accent’ rap.

DJ Armani, host of Rhythms in the Citi on Citi 97.3 FM nearly turned the auditorium into a club when he took the turntables to play a string of hit songs ranging from highlife, hiplife, afro pop to hip hop.

The auditorium was charged up when Sister Derby came on to perform her popular ‘Kakalika Love’. Of course her performance was one a lot of people had been looking forward to, considering the controversy that came with the song – the Medikal and Fella Makafui factor.

She came on stage with props that portrayed the ‘kakalika’ (cockroach) that is mentioned in the song.

Article Wan was next to perform after Eddie Khae. He did songs like ‘Solo,’ ‘Dat Thing,’ ‘Hallelujah, among others.

She joined Article Wan on stage when he was performing, and wowed the audience with some crazy dance moves.

Article’s act got more interesting when Santa Claus came on stage holding an image of Patapaa when Article Wan was performing ‘That Thing’ which features Patapaa.

Then came TIC, formally Tic Tac, who treated the crowd to some of his popular old tunes.

Perhaps this is an indication that TiC is really back in the music industry. He kept patrons on their feet to his old songs and later introduced Kuami Eugene, did Kwani Kwani Part 2 with him and left the stage for him.

Kuami, who performed for about 30 minutes was really in his element as he rolled a line-up of his hit songs from ‘Boom Bang Bang,’ ‘Wish Me Well,’ Adina’s ‘Killing Me Softly,’ among others. 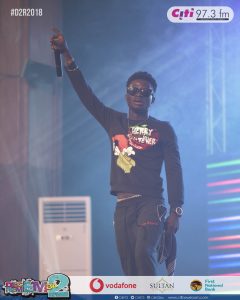 The popularity of his songs got the crowd to sing along along every track.

Kidi, Wendy Shay, Ponobiom and Adina also took turns to serve their audience their dose of the D2R package.

The show got to its crescendo when Praye got on stage. Their energetic stage act and their hit songs of old got patrons on their feet throughout the performance. The response was deafening! 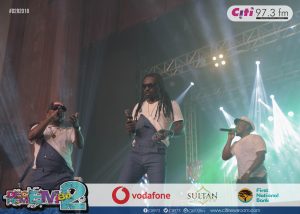 Koded of 4×4 fame, Wutah Kobby and Tinny later joined them on stage to perform ‘Jacket.’

The crowd in their white top and jeans, the official dress code for the concert, could not control their joy as they cheered on the surprise acts.

Of course, Eddie Khae could not have been left out of the party, considering the fact that he has the biggest dance music. What else would patrons do to his performance than to ‘do the dance.’

Stonebwoy, has for umpeteenth time, proven his dexterity on stage; he has cemented his name in the annals of great performers in the country and could not disappoint on the big night. He gave patrons their money’s worth with back-to-back hits.

Another act whose presence spiced the concert up was comedian Bash. His jokes got the patrons in D2R frenzy, as has been typical of him at previous D2R editions.

The MCs for the night were the host of Hall of Fame on Citi TV, AJ Sarpong and Osei Kwame, co-host of Traffic Avenue on Citi 97.3 FM.

DJ Armani was the official DJ on the night. 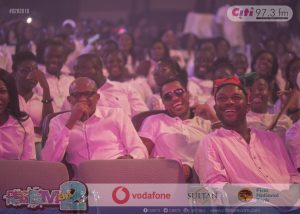 #D2R2018 was put together by Citi FM and Citi TV; and was sponsored by Vodafone and Sultan Drinks.