I never saw my mum until junior secondary school – Sarkodie

by ghanaweekend
in Celebrity News, News
Reading Time: 1 min read
A A
0
ShareTweetShare

Ghanaian rapper, Michael Owusu Addo, popularly known as Sarkodie has taken all his fans and followers to a trip down memory lane to share arguably the toughest challenges and saddest aspect of his growing life many people didn’t know about.

The Sarkcess music boss yesterday, January 6, 2019, appeared on Franky5’s ‘This Is Gospel’ show on Hitz FM.

On the show, Sarkodie revealed that he never had the pleasure to set his eyes on his biological mother until he was in junior secondary school.

He told Franky5 that this happened because his dad took him away from his mum when he was still a very little boy and took handed him over to a caretaker. 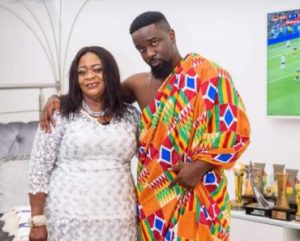 The ‘Can’t Let You Go’ hitmaker added that growing up with this caretaker was not as pleasant as he would have wanted because aside from being denied the pleasure of growing with his mother, his dad was also not around to be the father figure in his life.

Sarkodie further revealed that in all of those challenging days, the only thing he did was to pray to God and ask for protection and blessings which finally led to his mother coming to his school, Achimota Preparatory, one day.

The ‘Adonai’ hitmaker stated that as soon as he saw his mum, he didn’t even think about being punished by his teacher, he immediately took to his heels and run into the warms and lovely arms of his mother, Emma Maame Aggrey.