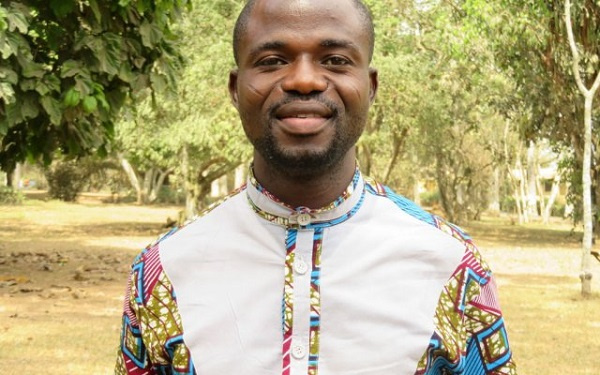 The BBC Africa Eye exposé which fingered Prof. Ransford Gyampo and Dr. Paul Kwame Butakor, all of the University of Ghana of engaging in the act tagged “sex for grades” has kept Ghanaians talking for the last few days.

Butakor and Gyampo per the BBC documentary allegedly used their powers as lecturers to sexually harass female students.

Some have argued that the exposé was either rushed or BBC did a shoddy work, while others also maintain it is enough to get sexual harassment issues addressed.

One of such people who believe the exposé could have been done differently is Ghanaian investigative journalist, Manasseh Azure Awuni.

Manasseh argued that the hypothesis of the BBC documentary could neither be accepted nor rejected because it was not tested.

He took to his Facebook page to post his concern, which he titled [The “Sex for Grades” hypothesis] explaining how an investigative work is done to arrive at a meaningful result.

“When going undercover to bust someone allegedly involved in an illegal or immoral act, you secretly record the incident, unobtrusively, as it takes place between the culprit and third parties. Where, that is impossible, you may have a sting operation. Here again, you pose, for instance, as the prey, meet the predator and record proceedings. In that case, you don’t change the identity of the character you are playing or the subject of your investigation when you meet the alleged predator,” he posted.

“Investigative journalism is like academic research. If you have randomly or purposively (as in Prof. Gyampo’s case) sampled a university lecturer who allegedly offers undeserved grades to his sexually harassed students, then you can only use one approach to test your hypothesis: let your engagement focus on the subject of the investigation. Go to the lecturer and tell him you are one of his over one thousand students and you have failed his subject or you are not sure of passing his subject. If he asks for sex in order to give you the grade, you have your story,” he added.

He argued what should have been done in the case of Prof. Gyampo for a ‘better’ outcome.

“You can easily get a fake student ID card and index number that show you a student taking his course. When you are going to bust a lecturer offering grades in return for sex, you don’t go to him or her as someone seeking mentorship or to seek national service placement without mentioning the subject of grades.”

“In the case of Prof. Gyampo, as shown in the video, the lecturer made advances at a student who wanted to be mentored. In the process, he told her to be free to accept or reject the proposal. She did not give in. He requested a hug after buying her shoes. She declined. And they parted ways,” he expressed.

He, however, concluded by saying he is not justifying the conduct of Prof. Gyampo as captured in the video.

“I’m not justifying the conduct of Prof. Gyampo in the video. But the BBC’s investigative hypothesis, ‘Sex for Grades,’ cannot be accepted or rejected because it was not tested in the first place”. 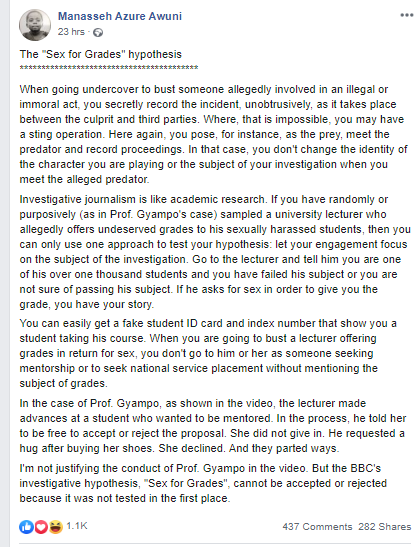