Brad Pitt and Jennifer Aniston celebrate together at SAG Awards 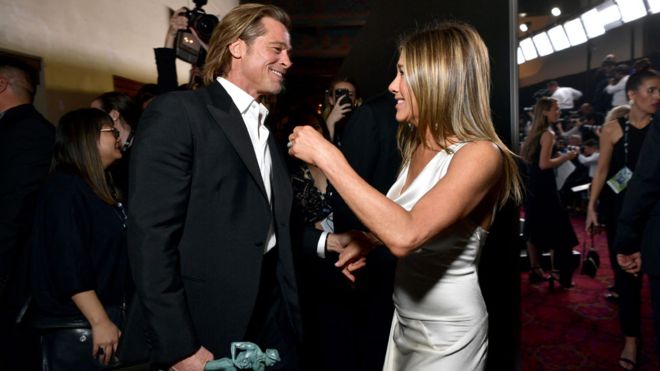 Brad Pitt and his former wife Jennifer Aniston both had reasons to celebrate at the Screen Actors Guild Awards, where they briefly reunited backstage.

Pitt was named best supporting actor for his role in Quentin Tarantino’s Once Upon a Time… in Hollywood.

His win meant he was among the first to congratulate Aniston when she was named best actress in a drama series for The Morning Show shortly afterwards.

Britain’s Phoebe Waller-Bridge was also honoured at the event in Los Angeles.

The Fleabag creator was named best actress in a comedy series for the second instalment of her BBC sitcom.

Joaquin Phoenix and Renee Zellweger were named best actor and actress for Joker and Judy respectively, confirming their status as Oscar favourites.

Yet there was surprise when the South Korean film Parasite received the best ensemble cast award, the SAG’s equivalent to a best film prize.

In pictures: SAG Awards in Los Angeles
The award suggests Parasite – widely expected to be named best international feature film at the Oscars next month – could have a shot at the best picture award as well. The winners of best ensemble have gone on to receive the best picture Oscar 11 times in the last 24 years.

Pitt, who separated from his second wife Angelina Jolie in 2016, made reference to his colourful love life as he accepted his prize.

The 56-year-old joked that it had been “a big stretch” to play stuntman Cliff Booth, “a guy who takes his shirt off, gets high and doesn’t get on with his wife”.
Pitt then watched Aniston accept her award on a TV monitor and briefly held hands with her when they crossed paths backstage.

The couple were married from 2000 to 2005, after which Pitt married Jolie and Aniston married actor Justin Theroux.

Laura Dern cemented her own status as a red-hot Oscar favourite by winning best supporting actress for her role in Marriage Story.

The event also saw Sam Rockwell and Michelle Williams recognised for playing the title roles in Fosse/Verdon, the TV miniseries about choreographer Bob Fosse and his actress wife Gwen Verdon.

That show also won the best TV comedy ensemble award, with The Crown receiving the equivalent prize for television drama.

Game of Thrones and comic book movie Avengers: Endgame were also honoured for the work of their respective stunt teams.

Robert De Niro, recipient of a life achievement award at Sunday’s event, used his acceptance speech to accuse President Trump of “a blatant misuse of power”.

“I can imagine some of you are saying, ‘All right, let’s not get into the politics,”‘ he said after receiving his honour from former co-star Leonardo DiCaprio.

“But we’re in such a dire situation and it’s so deeply concerning to me and so many others, I have to say something.”

The SAG Awards are presented annually by SAG-AFTRA, which formed in 2012 when the Screen Actors Guild merged with the American Federation of Television and Radio Artists.

The organisation represents around 160,000 people, among them actors, dancers, stunt performers and voiceover artists.

The SAG Awards came 24 hours after this year’s Producers Guild Awards, one of which went to Phoebe Waller-Bridge and her fellow Fleabag producers.