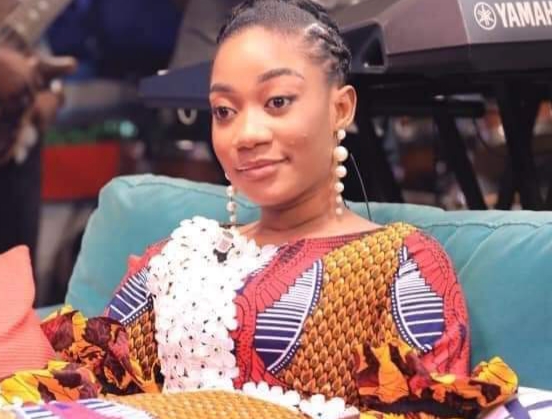 The newest music sensation who was discovered by music duo DopeNation got rave reviews when she performed on UTV’s ‘United Showbiz’ yesterday.

After the show, Fredima did a whole review of the session and suggested that Adelaide’s caretakers get her a “serious voice coach.”

UNITED SHOWBIZ, THE DOPE AND ADELAIDE THE SEER EDITION.

Gradually, this entertainment show on Utv on Saturday nights, is taking over viewership,social media commentaries, advertising and controversy in the media space. Thanks to the producers of the program. However, there is more room for improvement in terms of production especially from the hostess, camera angles, lighting,floor management, graphics and sound!

I was lucky to have been part of the third edition show when i appeared on the 14th September, 2019.

Yesterday’s show, was laced with a lot of musical performances by a new discovery in the music world, Adelaide the seer, a blind beautiful damsel, Dope Nation and Efya, the scintillating songstress.

Adelaide’s narration of her ordeal as to how she became blind and her eloquence really touched my heart and broke me down. Sorry for this mishap dear.

I must reiterate here that, yes Adelaide has a very good voice, she needs a serious voice coach and a mentor. She shouldn’t be rushed into fame because of her predicament. We thank Dope Nation for bringing her to the public attention. They can support her by inviting other professionals in the music industry to help groom her. They should take my advice! Her vocal delivery and certain nuances is a bit defective. Here i can recommend the likes of Freeman Daniel Ame, others. Dope Nation should not try to be her voice coach. The results might be some way with no malice intended.

The hostess, my beautiful Empress Nana Ama Mcbrown Mensah, should watch this. Sometimes her intro is too long and repetitive. She should be snappy.

Yesterday initially, Efya pretended as if she didn’t understand the akan language when she was asked a question and started with some LAFA bi, eii boi! It was latter during the conversation that, she opened up and spoke well.

As for Arnold,he has really transformed in his dancing skills since he hugged a transformer near his house. Lol

In summary, United Showbiz has come to stay and it is the most viewed tv program from 9 pm till Fadda Dickson and his crew get tired on Saturday nights. A lot goes into the production. Ink wo mu!

Kudos and more improvement in the creative arts sector.

Utv, it’s all about YOU!