by Kwame Dadzie
in News, Reviews
Reading Time: 3 mins read
A A
0 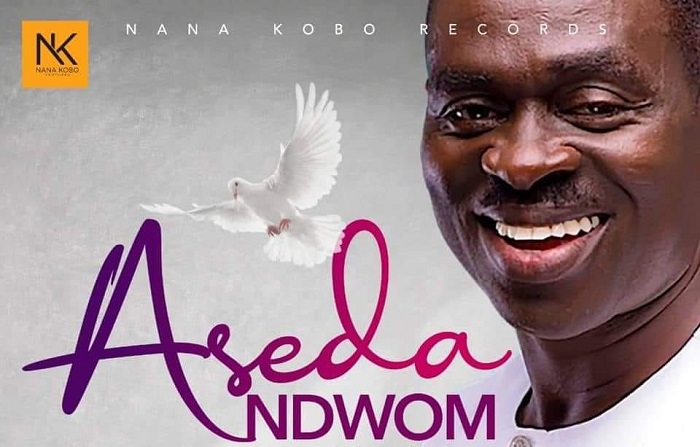 Introduction: After successfully re–launching his music career with ‘Ahobrase’ which featured Ghana’s rap heavyweight Sarkodie, Yaw Sarpong, and Asomafo are back with an encore: they have featured another musician outside their generation – Kwaku Gyasi, a gospel musician.

Instrumentation: With a very pronounced drum roll, set on the tone of a trumpet intro, with bumpy 4/4 time kicks to complement a groovy bass guitar strum, ‘Aseda Nwom’ starts in a highlife fashion.

It was produced by Sammi Helwani of Master Mix Studio, and all the instruments were played live.

Arrangement: ‘Aseda Ndwom’ starts with Yaw Sarpong asking people to help him give thanks to God for his mercies and grace. He also gives thanks to Bishop Dr. JY Adu of New Jerusalem Chapel.

He then brings in Kwaku Gyasi to reiterate his words of thanksgiving – God’s love that protects one from the wiles of the enemies. The melodies are an extraction of his popular ‘Onyame Aseda’ song.

Kwaku Gyasi sings that he is thankful to God for saving him from death.

Yaw Sarpong does ad-libs over the chorus done by Eno Tiwaa, which is a repeat of the first verse Kwaku sang.

After singing this twice, Kwaku Gyasi switches from his ‘Onyame Aseda’ vibe to a different progression, altogether. This verse continues to accentuate God’s protection which makes it impossible for anybody to destroy his children. After singing this thrice, Eno Tiwaa does a solo of the same verse (twice) in her own style. This is executed in canter and chorus format.

The call and response Kwaku brings in after this session is quite electrifying. That will actually trigger some dance moves among music lovers.

Yaw Sarpong gets noticed a tad at the tail end of the song when he advises people to be steadfast and pray so they don’t get devoured by the enemies. He then replicates the Kwaku Gyasi call and response till the song fades.

Vocals: Kwaku Gyasi in his usual loud self is easily identified in the song. However, I feel Yaw Sarpong’s verses and ad-libs were not prominent enough. Eno Tiwaa’s delivery was quite unique, and a bit refreshing from what she is typically known for on a usual Yaw Sarpong song.

At a point, Yaw Sarpong drifts a bit into an Elder Mireku-like kind of ad-lib; more so because Kwaku Gyasi’s style (which the song was mainly fixed on) is inspired by the Elder Mireku style.

Lyrical content: I spoke to Nana Poku Ashis, the manager of Yaw Sarpong and he said they did this song as a way of their thanksgiving to God for seeing them through the accident they got involved in a few months ago.

“The song is to celebrate their life after the gory accident. He has been pronounced dead so many times by pasters who claim God is speaking through them. So to have survived the accident was more like a victory to him,” he said.

The message is the usual thanksgiving content that permeates a lot of Ghanaian gospel songs. There is no extraordinary display of penmanship in terms of lyricism. I am sure the lyrics were made simple so a lot of people can relate to and jam to.

General assessment: Even though Kwaku Gyasi’s inclusion in the work is not a bad idea, he sounds boring at the beginning of the song.

I don’t like the fact that he repeats melodies for his ‘Onyame Aseda’. For Christ’s sake, he could have easily composed fresh melodies for the new song. I actually wish the song should have started with the second verse.

I also do not feel Yaw Sarpong much on this piece. Why they allowed Kwaku Gyasi to sing about half of the song still beats my mind. It was as though Yaw Sarpong and the Asomafo were rather featured on the song. I wonder how they are going to perform this music at any programme in absence of Kwaku Gyasi.

What I like about the whole work is rather the different vibe Kwaku puts Yaw and the Asomafo on. Hardly would you hear Yaw do such a fast-tempo song in that manner. So I wanted to hear more from Yaw, as in how he would deliver on such a totally unfamiliar rhythm.

I personally think the song should have started with the second verse. The first verse which is a remake of Onyame Aseda makes the song sound boring in the beginning.

Yaw Sarpong has been in the gospel music industry for over 40 years with about 27 albums, so he needs to ensure he maintains the standard he has sent for himself all these years.

Listen to ‘Aseda Ndwom’ below: