Who wins Entertainment Achievement Awards’ overall personality of the year?

by Kwame Dadzie
in News, This Weekend
3 min read
0 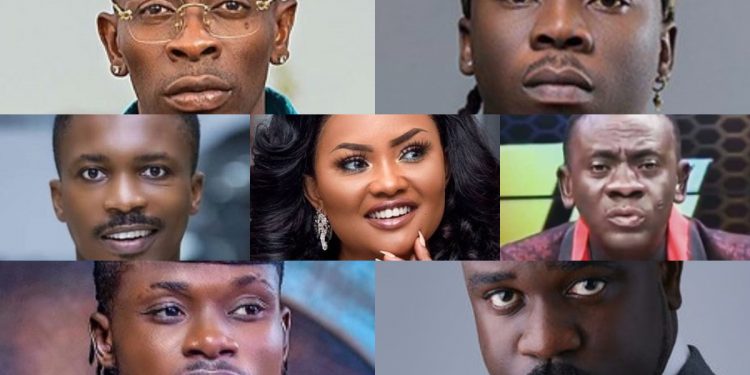 With a few days to the Entertainment Achievement Awards, the big question people are asking who wins the overall Entertainment Personality of the Year award.

Others are dancehall artistes Shatta Wale and Stomebwoy.

Rapper Sarkodie and highlife artiste Kuami Eugene have also earned a spot in this category.

Clemento Suarez is stage actor who for the past years, has endeared himself with entertainment through his stage plays and social media skits. His unbridled sense of humour, especially in 2020, placed him ahead of his colleagues in the same field. Clemento, in the year under review, got a lot of exposure after his ‘ABCD Coranavirus’ video went viral. Videos of him taking the mickey of Jerry John Rawlings, McJordan Amartey and other personalities really made him the toast of entertainment lovers. He performed at comedy shows including the Night of Laughs. He is also a regular feature on a comedy series called ‘The Boardroom’.

Akwasi Boadi, an actor popularly known in Akan-speaking movies, is one of the few Kumawood actors who have stayed relevant in spite of the lull in the movie circles. His show on UTV is one that has been widely accepted. What makes Akrobeto quite unique from his peers is the spontaneity with which he tackles his acts. Last year, one of his videos got featured in a Spanish news bulletin.

After being in the movie industry for about two decades, Nana Ama Mcbrown is another Kumawood actor, who has found an alternative love apart from acting when the industry took a nosedive in terms of production. She is currently the host of two shows on UTV: Mcbrown’s Kitchen and United Showbiz. Last year, her infamous video in which she was seen licking and kissing spilled cake off the hands of her daughter went viral and even got the international media’s attention.

Stonebwoy in 2020 released the Anloga Junction album which has great artistes such as Keri Hilson, Diamond Platnumz, Nasty C, Alicai Harley. He held his own virtual concert in the wake of the coronavirus pandemic and also held his Activate Party with Davido at the end of the year. His ‘Putuu’ and ‘Activivate’ songs, although not part of the ‘Anloga Junction album won him great spurs in 2020.

Sarkodie, in 2020, was also very visible with his activities. Even while stuck abroad during the coronavirus lockdown period, he released ‘Sub Zero’ and ‘Brown Paper Bag’. These songs stirred controversy in the rap world and even goaded Asem and Ball J to reply him. He even instigated the move to revive Azonto during the period. Sarkodie during the lockdown period also replicated ‘Verzuz’ with the ‘Behind The Hitz’ project in Ghana. It had music producers ‘battle’ it out on their Instagram pages. Later, he organised the Blacklove Virtual Concert in collaboration with Ceek and also his annual Rapperholic Concert in December. His controversial ‘Happy Day’ song was one of the biggest during the election period in December.

Shatta Wale is one of the first people to stage a virtual concert in 2020 during the lockdown. The concert had positive reviews by music lovers and critics. Aside from the few hit songs he released in the year, he was one of the celebrities that really entertained their fans on the internet at a time when people were not allowed to go out. The dancehall artiste also entertained his fans through his comic attribute, with videos on social media.

Lynx Entertainment signee, Kuami Eugene, has proven to be one of the most successful young artistes in recent times. He released his ‘Son of Africa’ album which has a lot of hit songs, performed at the major concerts that were held in the year. His feature on Sarkodie’s ‘Happy Day’, although controversial, sustained his relevance to the end of the year.

The maiden Entertainment Achievement Awards will be held on Saturday, March 27, 2021.

The awards will celebrate entertainers and entertainment industry players who have distinguished themselves in the practice of their art during the 2020 eligibility year.

Aside from presenting awards to deserving winners on the night, there shall be performances from Okyeame Kwame, Tulenkey, Kweku Flick, Kofi Jamar, and Abiana.

The hosts for the event are AJ Sarpong and Kwaku David of Citi FM and Citi TV.