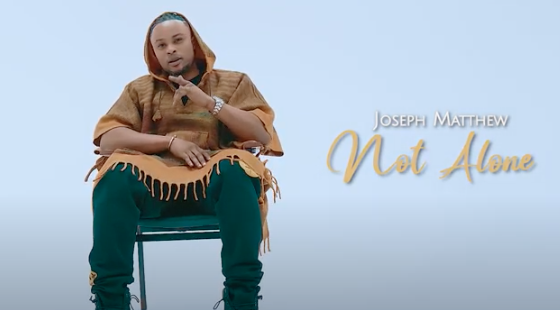 After releasing ‘My Story’ which dazzled Ghanaians with its versatility and originality, UK-based Afro Gospel musician, Joseph Matthew who is also known as JM has dropped another world-class song dubbed ’Not Alone’.

Crooned in low tempo highlife vein, the UK-based Ghanaian Gospel artist reveals in his ‘Not Alone’ single that:

“You hate me for being me, judge me for believing in myself and choosing to follow the path set for me by God. You wished to destroy me and worse of dead but God’s plan shook you and caused you to show your true evil colours. Bet you didn’t know I was NOT ALONE and that God was moving with his people all along was never born holy, but was born into sin and did not deserve the glory of God”.

The song was produced live by award-winning sound engineer, Francis Osei. When it comes to producing well-directed gospel music videos, JM has also really carved a niche for that.

Just like the song clip for ‘My Story’, JM did not fail to impress with the aesthetic artwork, scenery and choreography.

Shot in London by award-winning director Martin Sean, the video is dominantly bright themed, with two beautiful sceneries that are meant to coordinate the story appropriately.

As Ghana struggles to win her first Grammy Award, Joseph Matthew’s ’ Not Alone’, is a sumptuous song that has the potential of breaking that jinx.