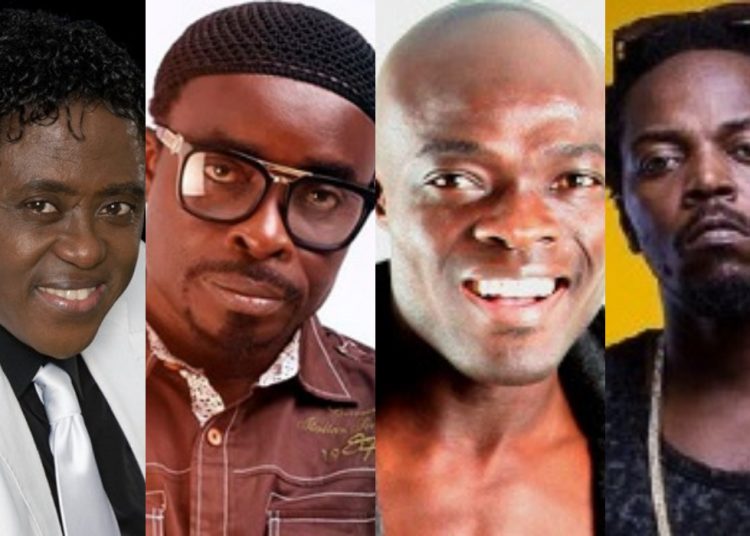 Widely known as Akuapem Poloo, Rosemond Brown was found guilty of posting a nude photo of herself and her seven-year-old son on his birthday back on June 30, 2020.

The complainant in the case was Bright Appiah, who is the Director of Child Rights International Ghana.

He petitioned the police after the photo went viral on social media, and the matter was referred to the Domestic Violence and Victims Support Unit (DOVVSU).

She was handed her sentence today, Friday, April 16, 2021, by an Accra circuit court.

But this is not the first time somebody in the Ghanaian showbiz space has been sentenced for committing an offence.

Below are other Ghanaians creative arts people who have been jailed before:

Nana Akwasi Agyemang aka G-man was one of Ghana’s finest dancers and musicians.

He could play the piano, drums, and guitar.

In a scuffle with a taxi driver, in 1995, he shot the taxi driver. He says that he never meant to kill the driver but threatened him to reverse a curse he placed on he and his friend Abieku Nyame alias Jagger P after picking sand from their footsteps. He was sentenced to death by hanging in 1995 and was released by a presidential pardon granted him in 2009 by outgoing president Kufuor. He spent 14 years in jail.

He is currently a pastor.

Highlife musician Daasebre Gyamena was jailed in 2006 in the United Kingdom for possessing substances suspected to be cocaine when he disembarked from the British Airways flight from Accra.

Reports from the Heathrow Airport indicated that on their routine checks on passengers arriving at the airport, customs officials, aided by sniffer dogs, picked out the suitcase of the Ghanaian musician.

According to a spokesman for the Customs and Excise at the Heathrow Airport in London, Mr Bob Geiger, Daasebre Gyamena had in his possession two kilograms of the suspected substance concealed in his suitcase.

Gyamena was subsequently charged for attempting to smuggle cocaine into the UK and was on Friday arraigned before the Uxbridge Magistrate’s court in London, where he was remanded in custody to reappear in seven days.

Gyamena came into the limelight with his hit song, “Kokooko”, in 1999. He has other hit songs like

Hiplife musician, Kwaw Kese, was jailed in 2014 jailed for smoking cannabis in public.

High Court judge William Boampong sentenced Kwaw Kese to a day in jail and ordered him to pay a fine of Gh¢1,200.

The musician was on remand for over a month at the Kumasi Central Prison before he was bailed on December 30, 2014.

Ibrahim Sima was the Chief Executive Officer of the Exopa Modelling Agency.

He was sentenced by an Accra Fast Track High Court in September 2011 for possessing and attempting to export 4.9 kilogrammes of cocaine concealed in four tubers of yam.

He died Thursday at the Nsawam prison where he was serving a 15-year jail term for trafficking narcotics.

Sima passed away after suffering injuries from a football game. Prior to his death, Sima had complained of a headache. He died on Thursday, December 4, 2014 at the Police Hospital after he had been rushed there.

The Chief Executive Officer of Goodies Production, Isaac Abeiku Aidoo was sentenced to 13 years imprisonment in hard labour by an Accra Circuit Court for attempting to export 80 pellets of cocaine to London after he changed his plea to guilty.

The trial of the accused person came to an abrupt end when in his defence he apologised and prayed the court presided over by Mahamadu Iddrisu to deal leniently with him as he had never intended to engage in any drug business.

The trial judge did not waste time in sentencing the accused person, known in showbiz circles as Goodies, to 13 years each on two counts of possessing and attempted exportation of narcotic drug without lawful authority; but the sentences are to run concurrently.

Mr. Aidoo was released from the Nsawam Prison on Tuesday, December 23, 2014.

Renamed Goodies Music International (GMI), the record label is now headquartered in Belgium, even though it is also well-grounded in Ghana; it is legally registered as a record label in Belgium.

With this new consolidation, Goodies Music International can currently boast of new state-of-the-art recording studios in Ghana, Belgium, and the United States of America (USA).

Ghanaian musician-Akyampong popularly known as Deeba shot to fame during the early days of hiplife with his popular tune-Deeba.

He was arrested by Interpol after a long search, for allegedly defiling his 8-year-old stepdaughter of his fiancee in the United Kingdom, between 2006 till 2008.

A legal document in relation to this case mentions that Deeba returned to Ghana from the United Kingdom after living in the UK with his fiancée, with who he has two biological kids. It is during his two years stay in the United Kingdom (2006-2008) that he is alleged to have committed this inhumane act on the 8-year-old stepdaughter and then fled to Ghana.

In 2010, William Ramzy Amui aka Ramzy, first runner-up in the first edition of a music reality show, Stars of the Future was sentenced to 10-year imprisonment with hard labour by the Tema High court presided over by Justice Peter Offei.

Ramzy and eight others pleaded guilty to charges of conspiracy, armed robbery, and dishonesty receiving under Article 29, Clause 146 of the criminal code.

His counsel, Capt Nkrabea Effah-Darteh, was not in court at the time of the sentence. Prosecuting the case, State Attorney, Ms. Hilda Worwonyo told the court that the complainant in the case, Mrs. Cynthia Koda, a Tema-based businesswoman on January 23, 2007, reported an armed robbery attack to the Tema Regional Police.

According to Ms. Worwonyo, Mrs. Koda said her 4×4 Toyota Hylander with registration number GT 6409X and an amount of GH300 were taken from her at gunpoint at her community 11 shop the previous evening.

Ramzy who is now a minister of God has songs like ‘Ekemi Ye’ and ‘Asumdwee’.

Richard Kwabena aka Shaka Zulu, a bouncer and a popular face on television, was jailed in 2013 by an Accra High Court for robbery.

Shaka Zulu was yesterday sentenced by the Court along with three others to 30 years imprisonment each for robbery.

They were said to have violently robbed a businessman, Clever Omwarihiren, at gunpoint at Baatsona on the Spintex Road in Accra.

Shaka Zulu and his accomplices, Wise Gray alias Biggie, Abass Baba, a trader, and Paul Owusu alias School Fees, a draughtsman, were found guilty and each handed 15 years for conspiracy to commit a crime and 15 years each for robbery, after the trial judge Justice Charles Quist said he found them guilty of the offence.