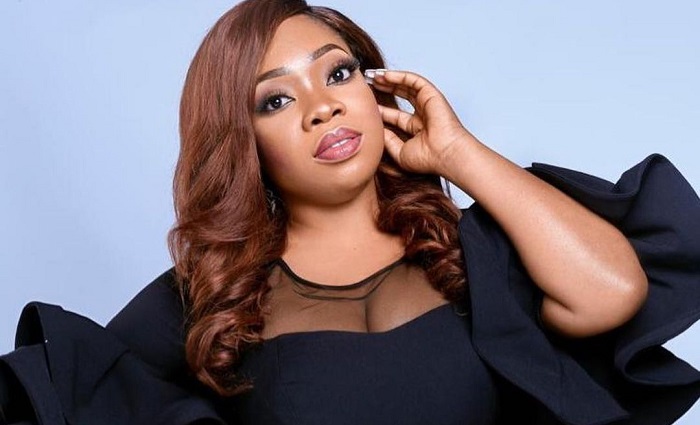 The family of born-again socialite, Moesha Bodoung has issued a statement asking the general public to allow their daughter to heal from her recent challenges.

After renouncing her sins at the Revelation Church and announcing she was born again, Moesha was found on top of a story building attempting to kill herself, a few weeks ago.

This generated conversations with some people opining that her condition might either be spiritual or psychological.

In the wake of this, there have been other speculations about her car, house, and her current state of mind.

The family also expressed their disappointment about an audio recording circulating on social media purported to be Moesha’s brother.

Read the statement by the family, below:

“Everybody has a past, a present, and a future. We have all lived life’s that, depending on the “friends” or “people” around you, can positively or negatively influence your life. Some have lived high lives and others have lived practical lives.

No matter what happened or where Moesha has been and no matter who she has “used” or “offended”, we believe that there comes a time in life when realisation sets in or a time when you “wake up” from your past and try to make good of your life.

We believe Moesha has the right to a “new beginning in Christ” and a chance to make right her life. We are pleading with all persons to please allow her time from gossip, bad-mouthing, social media bickering, and negative talking to find herself.

We support the decision she has taken and will support her in any positive way to help her find her real self.

No persons have been authorised to solicit funds to support her or on behalf of the family. However, the family is extremely grateful to everyone who reached out genuinely to help.

We further note with disappointment an audio recording circulating on social media purported to be her brother. We condemn the contents of the recording and state categorically that it is not her brother. The supposed Nelson is not a known relative of the family.

Let’s let Moesha “heal” peacefully and let’s give her space from all networks to enable a new, positively fulfilling, and effective beginning for her.

Everybody deserves some privacy at one time or the other in life and this is the least we can offer Moesha now.”

The audio captures the following:

1. That Moesha Buduong Burnt Over Ghc50,000 Because One Pastor Asked Her To Do So.

2. That Moesha Buduong Told People That Sandra Ankobiah Is A Drug Dealer.

3. That Moesha Buduong Isn’t Returning To Normal Again Because She Has Been Cursed By Wives Of Rich Married Men She Dated.

4. That Moesha Buduong Had Two Sugar Daddies In Nigeria, An Occultic Pastor And A Senator’s.

Barely 24 hours after this alleged tape went viral, Moesha’s family has released a statement to react to it and address other issues.