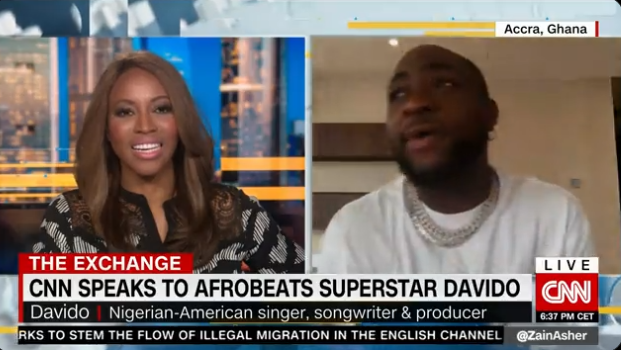 Nigerian singer, Davido, says the rising popularity of Afrobeats outside Africa is evident of the hardwork of African musicians over the years.

Davido who was speaking from Accra in a video interview with America’s Cable News Network (CNN), explained that the genre is loved and patronized across the entire continent of Africa, and thus should be given the needed recognition by the international media.

Davido said Africans have their own versions of mega events such as America’s Super Bowl, which presents a major platform for entertainers to perform for their fans.

The singer is currently promoting his new single, “Champion Sound,” which was released after his unprecedented birthday fundraiser on Twitter which earned him more than 600,000 dollars.

Davido subsequently issued a press statement that all the donated money will be sent to orphanages across Nigeria.

“I always knew if people heard it, they would love it.”

Plus, he sets the record straight on how his joke on Instagram netted him $600k for #Nigerian orphanages. pic.twitter.com/hWaViMfRJ9