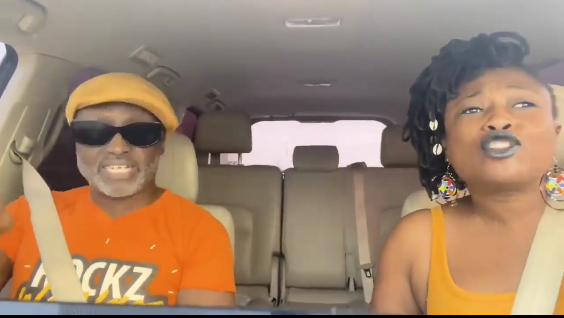 Veteran rapper, Reggie Rockstone and wife, Zilla Limann, are at it again and fans cannot get enough of their usual banter as the Grandpapa reveals his jealous side after one of his customers allegedly flirted with his wife in his presence.

Reggie Rockstone, was not happy when a customer entered his pub and attempted to flirt with his wife.

According to the rapper, even though his wife eventually introduced him as her husband, he was not happy about the man’s conduct prior to that — having already seen Zilla wearing a wedding ring.

“He is a New Yorker, and I believe he knows the OG code, so he shouldn’t have done that with someone’s wife.”

Zilla however played down Reggie’s allegations, explaining that the man in question only made a complimentary remark to her, which made her happy, after which she told him about his husband, Reggie.

According to Zilla, she does not question her husband when he does the same thing with other women, and therefore does not understand why Reggie was so worried about the encounter.

Zilla added that she expects her husband to be rather happy that someone finds her attractive.

Reggie Rockstone and Zilla have been married for 19 years with three children together.

They currently run their food company, ‘Rocks Waakye’, which offers special packages including meals in jars.