by Kwame Dadzie
in Celebrity News, News
Reading Time: 4 mins read
A A
0 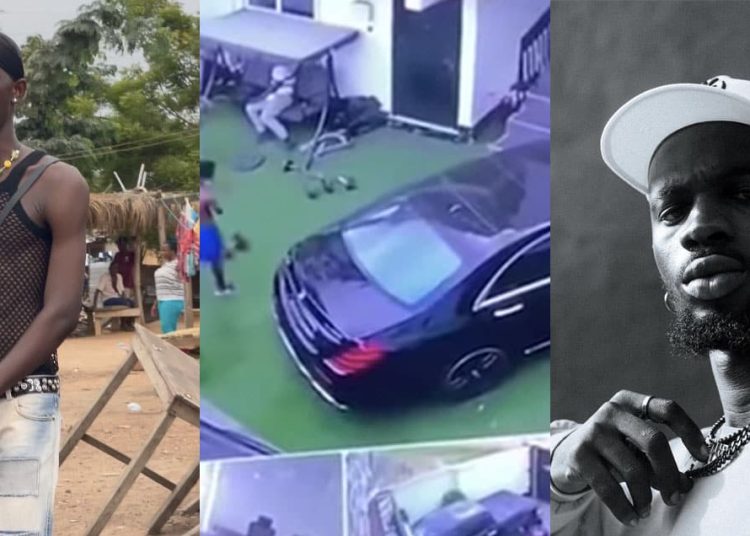 The past days have been awash with stories regarding a supposed ungratefulness being shown by Black Sherif to his ‘manager.’

The story was culled from a statement made by a Kumasi-based radio presenter called DJ Slim.

On one of his shows, DJ Slim intimated that Black Sherif had neglected his manager after gaining international prominence.

DJ Slim alleged that Black Sherif had vacated a 7-bedroom house that his supposed manager gave him, which was equipped with an ultra-modern studio and a gym.

The loudmouth presenter claimed that the supposed manager also bought him different pairs of sneakers exceeding 100 pieces which he left all behind to be to get affiliated to Empire Entertainment.

He also said the ‘Second Sermon’ hitmaker terminated his contract of 5 years in less than 5 months into it.

He further shared a screenshot, videos, and pictures of what the supposed manager had done for him to substantiate his wild allegations.

He said the kingly treatment Black Sherif was given included being given a 2020 Toyota Tundra, Mercedes Benz C 300, an ultra-modern studio embedded in a 7-bedroom mansion plus other luxuries that enveloped him which paints a different imagery about his sober, self-pity public image.

He also stated that Black Sherif did not inform the said manager about his deal with Empire and all the international shows he has been billed to perform at.

What Ghana Weekend has gathered so far

A source at Empire has refuted the claims made by DJ Slim that Black Sherif has completely parted ways with his management to sign with the San-Fransisco based independent label giant.

In a phone interview exclusively with Citi TV and GhanaWeekend’s Olele Salvador, the rep (name withheld) noted that Black Sherif has not parted ways with his manager or his management(Road Boys Association).

“It is safe to say that Black Sherif has not left his management. We are only responsible for the distribution and activation of his songs to other markets.” he revealed.

The Second Sermon Remix which has become one of the strongest elements of the chaos where Burna Boy is alleged to have been paid an amount of money and his costume bought to a tune of $5000 was also debunked.

The rep told Olele that “Black Sherif did not buy a costume for Burna Boy at the cost of $5000 for the Second Sermon Remix video shoot.”

However, he said an undisclosed amount was indeed given to Blacko as part of the deal which partly funded the logistics of the shoot.

In satisfying our curiosity, we further inquired if indeed Burna Boy’s feature was purely organic as seen on his social media pages or it was part of a grand agenda to his label – Spaceship Records. We can confirm that Burna Boy’s interest was not contrived and that Black Sherif’s management were responsible for getting the remix done. Having observed all technical protocols, EMPIRE only became responsible for the distribution.

So who then is this ‘manager’ and how has he become the antagonist in this matter?

A source close to Black Sherif’s camp tells Ghana Weekend that the ‘manager’ in question is actually a business partner who decided to invest in Black Sherif’s talent.

“The person being referred to as Black Sherif’s manager is rather an investor who came on board after Black Sheriff had released ‘Second Sermon,’ to inject some money into Black Sherif’s musical projects” he revealed.

“The investor at a point shelved the duties he was supposed to have played and instead tried to get into the work that the boys had been doing for Blacko.”

“Somewhere along the line, this investor turned himself into a booking agent, booking Blacko for some shows in the US and UK without his consent, to the extent of signing some contracts,” the source further noted.

He also made a shocking revelation of how the said investor used the opportunity to sell visa slots to people.

“Can you imagine that this guy accepted a show, which had five visa slots including Blacko and was selling each one for $8,000 for people around him? So if Blacko had gone for that show, it would have been him without his team,” he added.

According to him, the cars and the house that were purported to have been bought for Black Sheriff are also untrue.

He disclosed in our conversation with him that, the bit where it was alleged that Black Sherif smashed a Toyota SUV(Tundra) is a fallacy, explaining that although the cars captured in the story may have been used at some point, they were not ‘bought’ for Black Sherif.

More information from our findings

In our quest to get down to the bottom of this issue, we also touched base with Black Sherif’s management team, Road Boys Association, who stated that Black Sherif has not parted ways with them.

“Blacko has never gone behind us to sign any deal with anybody. We’ve been working with Blacko for the past two years.” a rep from his management intimated.

Responding directly to the allegations made by DJ Slim, the rep denied that DJ Slim was part of the team. He went on to add that their relationship is very casual, meaning that he was not speaking as an authority on Blacko’s career.

Road Boys management are the only ones who can negotiate on his behalf. In fact the rep was keen to praise Blacko’s conduct and that it is not something he would do. He reiterated that there was no friction in their relationship.

He, therefore, denied that the artist had been given any accommodation or housing by any external sources, revealing that the management rather arranged transport when necessary.

The videos which were used to highlight Blacko being transported to a show with a mammoth convoy, as well as the live band by the said investor, was when Blacko was billed for Afrochella.

Apparently, the band has always been with Blacko and they already had a good business relationship with the management.

Keep reading Ghana Weekend as we nose out all details of this matter.