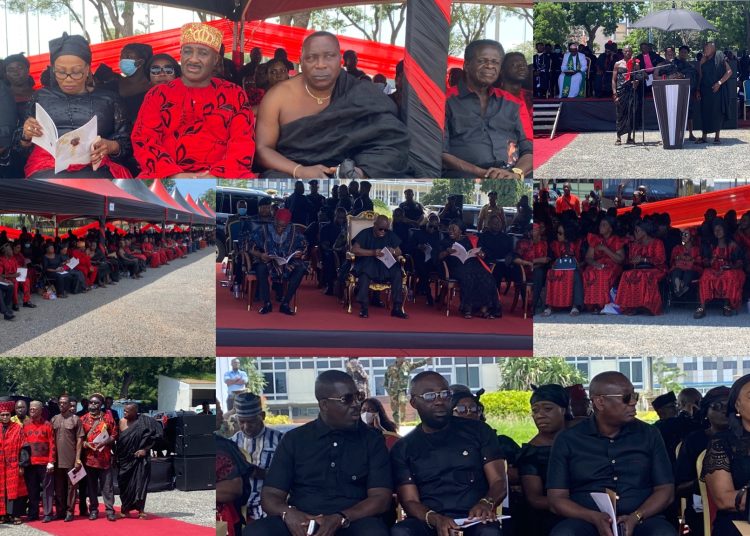 Hundreds of Ghanaians have paid their last respects to highlife singer, Nana Kwame Ampadu, who passed away on September 28, 2021.

President Nana Addo Dankwa Akufo-Addo was present at the ceremony with a team including the Speaker of Parliament, Alban Bagbin and the Minister for the Interior, Ambrose Dery.

The president said the outpouring of grief by the public following the unfortunate news is indicative of the prominence of Nana Ampadu and his contribution to the development of the music industry in Ghana.

He said the singer also played an instrumental role in the success of the 2016 electoral campaign which brought him to office.

“The outpouring of grief by many Ghanaians, following the news of his death, is an appreciation of the impact his music had on successive generations of Ghanaians. Nana Ampadu believed in my vision for the transformation of Ghana, and assisted me tremendously on the campaign trail in the run-up to my victory in the elections of 2016, for which I remain eternally grateful.”

The burial and final funeral rites will be held in his home town Obo Kwahu in the Eastern Region.

Nana Ampadu was one time President of MUSIGA and was also the leader of the African Brothers Band, formed in 1963.

He composed over 800 song, most of which become hits in Ghana and other West African countries.

He came to prominence in 1967 when he released his song Ebi Te Yie (“Some Are Well Seated”), a song that was seen as critical of the then-governing National Liberation Council (NLC) which toppled Ghana’s first president, Kwame Nkrumah.

The song disappeared from the airwaves, only returning after the end of military rule.

In 1973, he won a nationwide competition in Ghana and was crowned the “Ndwontofoohene,” or King of Singers.