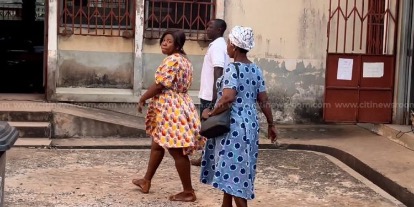 Josephine Panyin Mensah, the lady at the centre of the fake kidnapping and pregnancy case at Takoradi in the Western Region in September 2021, has been saved from jail.

Although she was found guilty of publication of false news and was supposed to serve a three-year jail term, Josephine was slapped with a GH¢7,200 fine instead because she is currently pregnant.

Josephine Panyin Mensah was found guilty of a misdemeanour and liable to 600 counts, which is 3 years imprisonment.

However, on her charge of deceiving a public officer, Josephine was acquitted and discharged.

While reading his judgment, His Worship Michael Kwodjoe Ampadu, the Presiding Judge of the Takoradi Habour Circuit court A, said there were no grounds to convict her on count one which is deceiving a public officer since her husband is not a public officer.

“The grounds for the first count of deceiving a public officer cannot be supported by the law. The accused didn’t tell the truth that she was pregnant, but the prosecution didn’t prove that this untruth was told by the accused. The deceit was also directed at the husband and not the police. The husband is not a public official, therefore nobody can tell me that she is guilty on this count”, he ruled.

On the second count which is publication of false news, His Worship Michael Kwodjoe Ampadu, said he wanted to sentence her to the 3-year maximum term to send a strong message to the public, but the law also disallows the sentencing of a pregnant woman to prison terms, hence the GH¢7,200 fine.