Who at all was the referee for the Ghana vs Portugal match?

by Ghana Weekend
in News
Reading Time: 2 mins read
A A
0 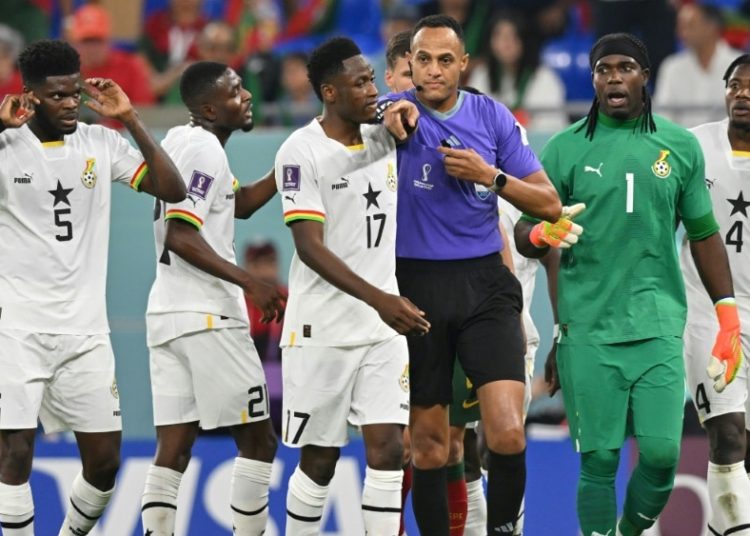 Ghana faced off against Portugal on Thursday in Group H in the ongoing FIFA World Cup in Qatar.

Despite the spirited play by the Black Stars at the 974 Stadium in Doha, the West African country still suffered a 3-2 defeat to the Portuguese.

A controversial penalty awarded to Portugal a few minutes after the second half began helped the Europeans break the deadlock after Cristiano Ronaldo found the back of Ghana’s net.

Ghanaians believed the penalty was not deserved and have, through social media, descended heavily on the game’s American referee, Ismail Elfath.

Osman Bukari headed home a second for the Black Stars, but the Portuguese held on.

Another controversial moment came in the game’s dying minutes, as Black Stars forward, Iñaki Williams, appeared to be tripped in the box by Portugal’s goalkeeper as he pounced on a loose ball.

This was also ignored by the officials, including Elfath, who blew the final whistle not long after.

Below are a few things to know about Elfath and his officiating crew:

According to Draftkings Nation, Ismail Elfath is a Moroccan immigrant to the United States and has risen to the top of MLS’ officiating hierarchy.

Earlier this month, he was the referee for the MLS Cup Final, handing out four yellow cards and one red card in LAFC’s win over Philadelphia.

His most notable international experience was at the 2020 Summer Olympics in Tokyo.

He was the referee for two group-stage matches and the Japan-New Zealand quarterfinal match.

Elfath has also had an uncomfortable prior encounter with Ghanaian players.

In 2017, he gave red cards to two Ghanaian players, Columbus Crew’s Jonathan Mensah and Lalas Abubakar in the same game, decisions which were heavily criticised by Crew’s manager at the time.

Elfath’s American officiating crew for the Ghana vs Portugal match according to Draftkings Nation included: