by Kweku Sekyi
in Celebrity News, News
Reading Time: 4 mins read
A A
0 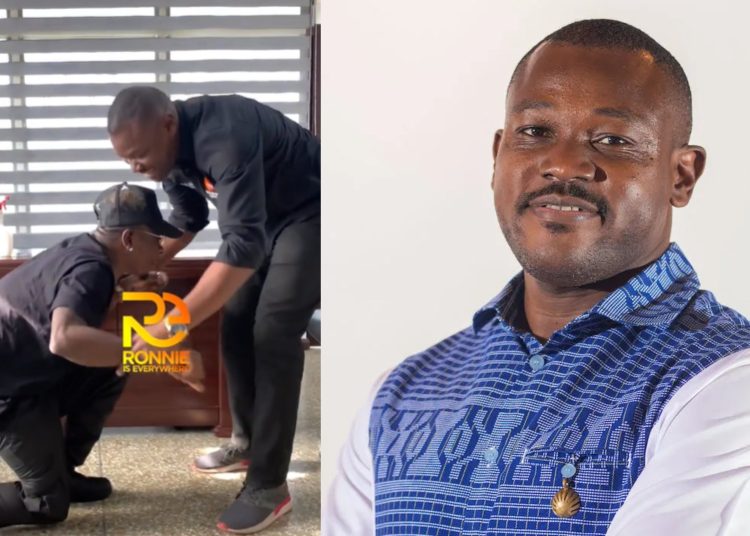 After Shatta Wale failed to perform at the Hogbgetsotso Festival despite an existing contract, the Dancehall musician has apologised to the sponsor of the event.

In a video shared by blogger, Ronnieiseverywhere, Shatta Wale was captured with Bola Ray and officials of the sponsor while asking for their forgiveness for the Dancehall artiste.

“It’s unfortunate what happened, but you are the CEO I will let the man (Shatta Wale) himself speak,” Bola said.

Right after the ace broadcaster ended his speech, the ‘On God’ artiste quickly knelt before the Executive Director of Total Family Health Organisation and brand owner of Ebony Condoms, Joseph Addo-Yobo, to apologise for missing a show they had billed him to be a star performer for.

Before Shatta Wale could bend both his knees, Addo-Yobo held the musician and asked him to take his seat while expressing shock at Shatta’s actions and demeanour.

A woman seated with them noted that Shatta Wale shouldn’t have gone on his knees because that wasn’t the reason for their gathering and went on to hug him.

On the said day, it was reported that Shatta, billed to perform as the headline artiste, failed to show up on stage, although he arrived in town for the event.

“It is interesting to note that Shatta Wale had shown up at the concert venue in vehicles rented for him and his team by the organizers yet could not be found afterward.

“All efforts by the two management teams to get him to come to the concert grounds to perform to the waiting crowd proved futile,” parts of the statement from the organizers read.

It was said to be a chaotic scene as disappointed fans who were gathered at the venue attacked some organisers by pelting stones at them and destroying their gadgets.

After days of silence, Shatta has taken to social media to state reasons for his absence on stage.

Stating his own side of the story, the Dancehall artiste expressed that he was disrespected by the organizers.

Buttressing his point, Shatta asserted that he was driven directly to a radio station to grant an interview when he already had an agreement with organizers that he would not participate in such an arrangement or even greet any chief.

He added that one of the organizers threatened to withhold his accommodation if he fails to grant the interview, and that was when he took off.