by ghanaweekend
in News
Reading Time: 3 mins read
A A
0
ShareTweetShare

Africa’s bid to win the Miss Universe crown back-to-back hit a snag in the early hours of Monday when the continent’s only finalist in the Top Three, Tamaryn Green from South Africa came second and thus missed making history.

She would have been crowned by the 2017 winner, Demi-Leigh Nel-Peters, who is also South African, making their country a back-to-back winner of the title.

But the all-female panel of judges voted Catriona Magnayon Gray, the queen from The Philippines as the overall best contestant at the spectacular show held at the IMPACT Arena in Bangkok, Thailand. Venezuela’s Sthefany Gutierrez came third.

Undoubtedly, Ms Gray dressed well, talked intelligently and walked impeccably to literally grab the crown from Tamaryn Green, who had earlier taken over from Nel-Peters as Miss Universe South Africa, hoping to also annex the global crown to cement Africa’s hold on the Miss Universe crown.

Ghana’s representative, Akpene Diata Hoggar made a strong showing in the competition, especially in the National Costume Contest, where her outfit depicted the modern-day Yaa Asantewaa, the late iconic queen of the Ashantis. 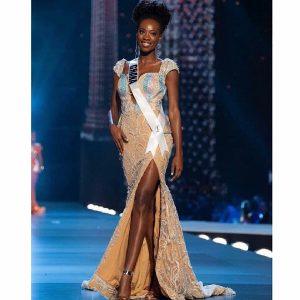 She could, however not break into the final leg of the competition and that was the story of all the seven other African queens, making South Africa’s Tamaryn Green the only African to be selected into the group of Top 20 finalists and later into the Top Three. 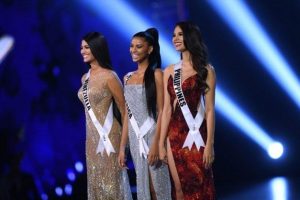 They all made Africa proud at all stages of the competition, especially as they told the world about their beautiful countries and their tourism potential.

All 95 contestants went through various mini contests in the run-up to the grand finale, these included competitions in swimsuit, national costume, evening wear and internet popularity. 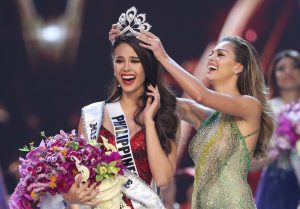 In the end, five each were selected from Europe, the Americas, Africa and Asia Pacific, with the last two combined as one region.

In the Africa and Asia Pacific Region only South Africa was chosen from the nine African countries represented at the pageant. Philippines, Nepal, Vietnam and Thailand completed the list for the Region.

Poland, Belgium, Great Britain, Hungary and Ireland qualified from the Europe Region while Curacao, Costa Rica, Canada, Puerto Rico and Jamaica made it from the Americas. The USA, Venezuela, Indonesia, Brazil and
Australia also qualified for the Top 20 based on what the organisers termed Wild Cards because they made it outside the regional contests.

Grammy award winner, Neyo held the audiences in the auditorium and around the world spellbound with some sizzling opening and closing performances.

One highlight of the event was when Miss Nepal, Manita Devkota claimed in a chat with the host that she was quite superstitious and that she had come to Thailand with a charm bracelet to help her in the competition but obviously, the “magic” in the bracelet could only work up to the Top 10 level, as she was dropped from the Top Five.

Miss Thailand, Sophida Kanchanarin, the host nation’s queen also sent the audience roaring with laughter when she literally announced that she was hungry when asked by the host how she was feeling in the thick of the competition.

In the question-and-answer segment of the contest, which was the 67th edition, the queens touched on various issues from the legalisation of marijuana to violence against women and on the whole, their individual deliveries were quite impressive.