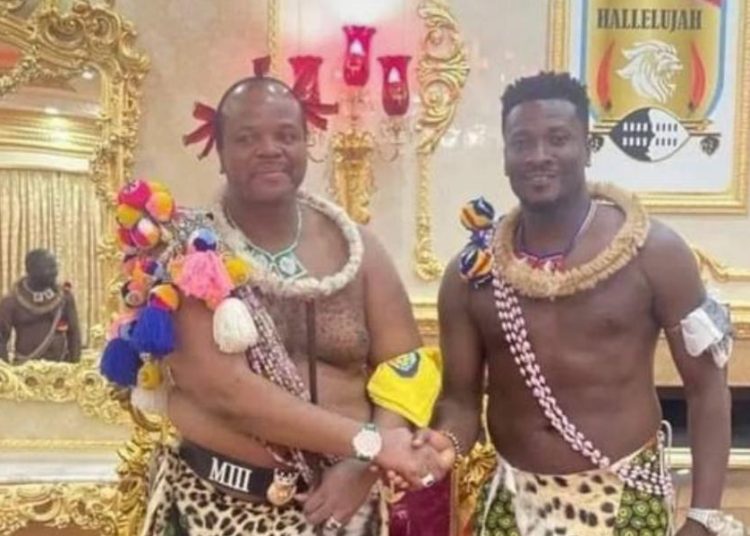 Gyan, who is a Tourism Ambassador for Ghana, travelled to the landlocked country in Southern Africa to celebrate its unique heritage and culture.

The tour, which began earlier this week, saw Asamoah Gyan and his manager partake in some traditional events where they danced their hearts out.

The highlight of his visit was a meeting with King Mswati III and elders of his court.

They all participated in the symbolic reed dance, an experience Asamoah tweeted as something he will cherish forever.

Asamoah Gyan expressed gratitude to the people of Eswatini for their warm welcome.

King Mswati, 46, is Africa’s last absolute monarch. His personal net worth is at least $50 million, based on the annual $50 million salary that he is paid out of government coffers. He also controls Tibiyo TakaNgwane, an investment holding company that has assets worth over $140 million, but he holds it in trust for the people of Swaziland.

King Mswati renamed Swaziland to the Kingdom of eSwatini in 2018. He currently has 15 wives and 36 children. A Swazi king’s first two wives are chosen for him by the national councillors. According to tradition, he can marry his fiancées only after they have become pregnant, proving they can bear heirs. Until then, they are only called “concubines”.

Had a wonderful and an amazing experience with my manager @AnimSammy and my brothers from Ghana as we joined his Majesty the king , the Queen and the warriors in the Reed Dance of the Kingdom of Eswatini 🇸🇿. What a moment to cherish forever . With Love ❤️ from Eswatini pic.twitter.com/y9FLPtHoMw